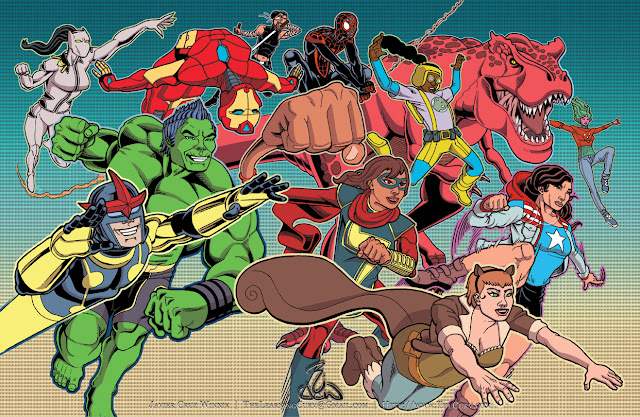 My intent with drawing this piece was to spotlight some characters that were underrepresented in comics. I focused on ethnicities and genders that aren't usually given the same love as our male friends, especially those who are of European descent. It allowed me to challenge myself yet again and I thoroughly enjoyed it!

One thing I realized while drawing this piece is that I've never drawn a Korean person. I've never drawn someone who is Muslim or Native American. I rarely draw Latino characters and I almost never draw anyone who is Black or of African descent. I want to change that. Everyone else can draw and will continue to draw male European characters. That's the status quo and it's an easy thing to do in this day and age. I believe I have an obligation to bring something to the table that has yet to be seen, or at least support things that don't get the support they need in my community, in real life and in comics. I'm not tryin to do anything easy anymore. "Be the change you want to see." My career has taken me on the path to this journey.