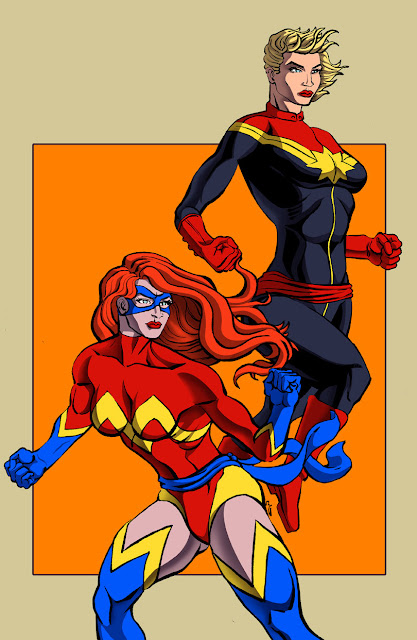 I have enjoyed the discussions about Ms. Marvel's new costume (on the right) and honestly, it's probably the most classic image I have ever seen in this modern age.  Generally when a characters costume is changed, it's very gimmicky and lacks any substance but this change is so different and at the same time very majestic, it does the character honor.

The other character I don't know much about, but I do know her name is Sharon Ventura and she use to go by the Ms. Marvel title. Doing a little research helped me to find out that she use to be the She-Thing as well.  I never understood that character , but it lead to an interesting bunch of stories in the Fantastic Four comic. 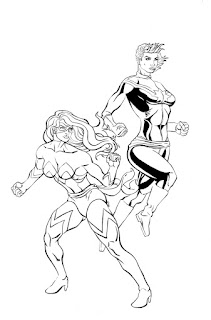 I've done a great deal of learning this past year.  This is the original inked drawing that was done and I realized I needed to change the composition. This image alone was fine, but was too static.  Bringing them both closer to the viewer felt more immediate and imposing so I made the changes for the color version.
Posted by Javier..... thelearningcurv at 9:02 AM