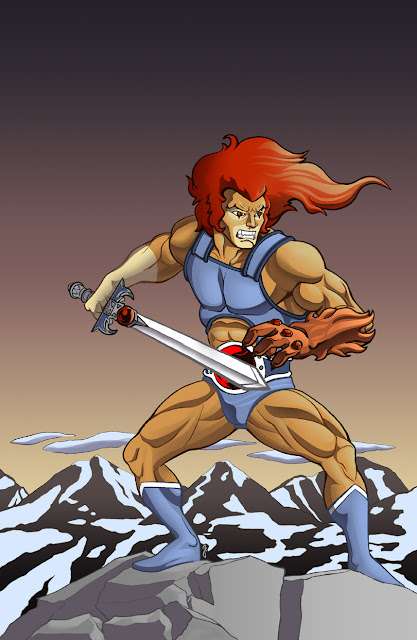 It's Wednesday and for those in the know, Wednesdays are sacred because thats when the new comics come out that week!  That being said, Saturdays are slowly becoming sacred again too.  Remember Saturday Morning cartoons?  Like Toonami, their baaaaaaaaaack=]

The morning starts at 9am with Ben 10 who now has a million aliens who he can turn into (future illustration! yea=]). 9:30 has the show that inspired this illustration and that's Thundercats. The cool thing about it is that they brought the show back from the 80's and reinvented it with a more  modern bend. The Thundercats are lords of their world filled with different animals and have lost their kingdom to Mumra who is slowly taking over everything.... there's a lot of twists and suspense in the show, plus the cool designs for the show, so it is well worth tuning in each week.

10am Green Lantern who is starting things FAST with the Red Lanterns being the early protagonists (good idea strangely enough) and the Star Sapphires and Blue Lanterns have been introduced as well. They've alluded to the Yellow Lanterns at a jail where the innmates are tortured by being made to relive your fears over and over again (and the walls are speckled with Yellow crystals, giving Hal Jordan the creeps and a ready villian for next season). 10:30 has Young Justice on the pine and that show is just DC Animation at it's best.

Over at Nickelodeon is The Legend of Korra at 11 am. This is the 4th season of Avatar, the Last Airbender (there are now new airbenders and they're AWESOME!) I have so many ideas for illustrations for this show, i wish I could get them all done! I think I have seen each episode about two or three times each on Demand and I am not getting tired of it at all.

Life has gotten better, thank you animators and tv programmers=]

Posted by The Learning Curv at 8:53 AM No comments: Links to this post

I had a chance to do three commissions that had some classic themes to them and that was right up my alley! The three pieces below are the final illustrations completed for a very happy person! 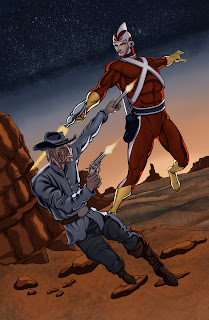 Jonah Hex vs. Adam Strange.  Old vs. New, Earth vs. Sky, Skill vs. Technology..... if you are into the DC Universe, this is a pairing of cult classics with a modern take.  Working on creating the balance in this was the most fun as an artist for me. 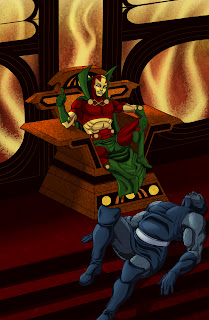 Mr. Miracle takes Darkseid's thrown..... Luckily the late great Mike Turner created Darkseid's thrown room in the story ark introducing Supergirl into the DCU.  There are no stairs in that image but I felt it'd make for a nice design element especially since the stairs puts the ruler higher up than those he is lording over. Rendering fire and showing a happy character, such fun=] 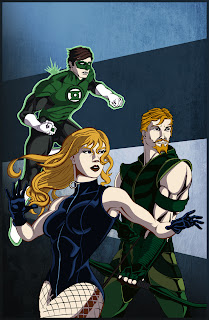 Green Lantern, Black Canary and green Arrow, a classic grouping of characters from the 70's. The characters are still around but back then, they were very buddy buddy and worked together quite often.  I wanted to create a classic styled look with again a modern sensibility for this one.  I kept the characters very animated in tone, less rendering and more direct with the lighting to make it look like something that could possibly be seen on tv.....

I made sure not to go too dark with any of these, I've noticed that my colors tend to be very dark so that was something I specifically was mindful of.  I hope you enjoy these, feel free to contact me if you'd like something custom made.
Posted by The Learning Curv at 12:13 PM No comments: Links to this post