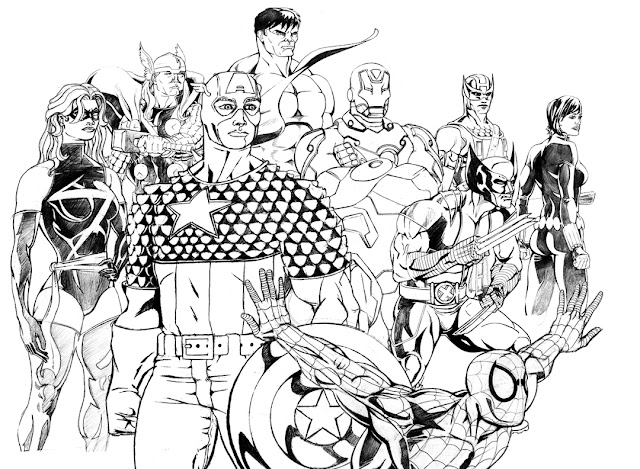 I have always been fan of the Avengers. I started collecting them in the 90's but quickly became a fan of the older comics. I think it all came from my love for the Official Handbook to the Marvel Universe trade paperbacks.  I had all 8 volumes and even the death volume.  All of the coolest characters and even the villains were from the Avengers books so I had to learn more about them.

The Avengers comic is now a book I can't do without.  As much as I am a Spider-man fan (notice he's in the closest in the foreground)  The Avengers are right there with him.  Brian Michael Bendis is in my opinion the best writer for continuing such cool stories for the most diverse amount of characters ever seen in Marvel Comics. I plan on drawing more characters and making this a much bigger grouping that I will end up inking and coloring.  Who would you like to see included in this mix?=]
and yes, this definitely was inspired by the new movie coming out=]
Posted by The Learning Curv at 10:00 AM